Posted on February 23, 2011 by vermontersforacleanenvironment

In February 2004, there was a public hearing on wind energy development in Rutland.  I prepared my presentation but never got there, waylaid in Montpelier by meetings. My presentation was in support of wind energy and I intended to point out that, unlike (display photos of) coal, nuclear, gas, oil and biomass power plants, all of which had vapor plumes in my photos, wind energy does not require a water source to operate.

Seven years later, I’m glad I never made that public comment. Ignorance is bliss where wind energy development is concerned, and the picture gets uglier the closer I look.  In Vermont, wind turbine construction on top of our mountains involves impacts to headwaters, the purest waters in the state feeding all life below.  VCE has worked for years on water protection.  We produced a collaborative book about respecting and protecting water.  We are saddened by the realization that mountain top wind turbine development is so destructive to water.  Vermont’s Agency of Natural Resources is participating in the wind industry’s failure to protect and respect water.

Ongoing litigation over the stormwater construction permit issued by Vermont’s Agency of Natural Resources is about whether or not the state is protecting headwaters from being degraded.  The case is about Vermont’s failure to an adopt an anti-degradation implementation policy, a subject that was part of VCE’s report on ANR issued in 2008. The report details the history of the federal law requiring states to implement a policy for anti-degradation to protect high quality waters, a policy that pre-dates the Clean Water Act, and the state’s promises to comply with the law.

The mountain First Wind has been clearing since September 2010 to erect 16 wind turbines 420 feet tall contains 5 headwater streams feeding the Calendar Brook Wilderness Area and Crystal Lake in Barton.  Those streams are outlined in purple and blue in the exhibit below; the proposed disturbed area is in gray [65 – 83 acres].  This exhibit was used in the Environmental Court trial held at the end of 2009.  I do not know if it is the final design, as the design kept changing.  No matter the final design, it is obvious that the site has a lot of streams and, according to neighbor Paul Brouha, these are excellent headwater trout streams.

Who is Paul Brouha and why should we care what he says?  Paul is a certified fisheries biologist who grew up hunting and fishing the mountain where First Wind is building roads capable of holding 200,000 pound trucks.  Paul was, among other things, national fisheries program manager in the Forest Service in Washington, D.C., executive director of the American Fisheries Society, and associate deputy chief for the National Forest System.  Paul Brouha knows more about water quality and aquatic habitat than anybody I have ever met.  He understands the potential for damaging those headwater trout streams, and he understands how to protect them.  As an expert witness, he has had to deflect allegations that he is just trying to stop the project, while applying his scientific knowledge to try and keep the fish alive and productive.

The docketing statement filed today with the Vermont Supreme Court explains the issues,

The Appellants challenged ANR’s issuance of the construction permit for this project because they believed that the permit was not protective of the pristine water quality of the headwater streams and the existing uses, which include fishing for the native brook trout that inhabit these streams. The Appellants also challenged the failure of ANR to require the Applicants-Appellees to comply with the Vermont Water Quality Standards (VWQS), despite the fact that there is no dispute that applications for a stormwater discharge permit must comply with the VWQS.

An important part of the VWQS is the Anti-Degradation Policy that is required under both federal and state law. The Anti-Degradation Policy requires that existing instream uses and the level of water quality necessary to protect those uses must be maintained and enhanced. It also requires compliance with standards and limits for various chemical, physical, and biological parameters.

In order to comply with the VWQS, the existing uses and the quality of the waters must be identified before a discharge permit may be issued, and this requires establishing baselines for the existing uses and existing chemical, physical, and biological qualities of the headwater streams on the site. Such benchmarks are necessary to determine during the life of the permit whether the VWQS including the Anti-Degradation Policy are being met.

To adequately protect aquatic life in the five high elevation streams impacted by the extensive road building over five miles of the mountain, the Agency should have required pre-construction baseline biomonitoring, stream substrate analysis and chemical analysis to establish the actual baseline status of the streams to be impacted.  Those variables should continue to be monitored during the construction.  To be protective of water quality, at a minimum the turbidity standard should be 10 ntu, and the applicant should be required to monitor for pH, Temperature and TSS in addition to turbidity.  The stormwater construction permit issued by ANR and upheld by Environmental Court was based on only two days of baseline monitoring and allows for the use of reference streams (so there is no way to evaluate whether stream sedimentation  of the actual streams involved is the result of First Wind’s construction activities), applies a 25 ntu standard averaged over a year (which allows for sediment entering the streams at much higher levels than 25 ntu), and there is no requirement to monitor for pH, Temperature or TSS.  Therefore, the permit ANR issued to First Wind for stormwater construction is in no way protective of the aquatic life of the streams.

Our understanding of how important this case is to water protection everywhere in Vermont is the reason we criticized the appointment of First Wind’s attorney, Ron Shems, to head the Natural Resources Board which oversees the Water Resources Panel. Our concerns are not political, they are based on the substance of the precedent being set in this case and Ron Shems’ role as lead counsel for First Wind in this case.

Validating Paul Brouha’s concerns about the potential for damage to the waters of the mountain in Sheffield, on a snowy morning in December a truck carrying explosives owned by Maine Drilling of Blasting of Gardiner, Maine overturned into Nations Brook on its way to the Sheffield wind farm construction site with nearly 2,000 gallons of 1.5 blasting agent used for construction demolition.  The follow-up report by Dr. William E. Irwin, Sc.D., CHP, Crew Chief, Training Officer Vermont Hazardous Materials Response Team says more than 100 gallons of various fluids were released into soils and the brook.  Through a public records request at the end of last year, VCE asked ANR for MSDS sheets for the explosives being used on the site, along with the total pounds of explosives. ANR was unable to produce any information about blasting.

First Wind worked at a furious pace clearing land, blasting and building a network of roads from September until just after Christmas in 2010.  As soon as First Wind announced it received a non-recourse loan from KeyBank for the construction of the Sheffield project, all the equipment was pulled off the site. 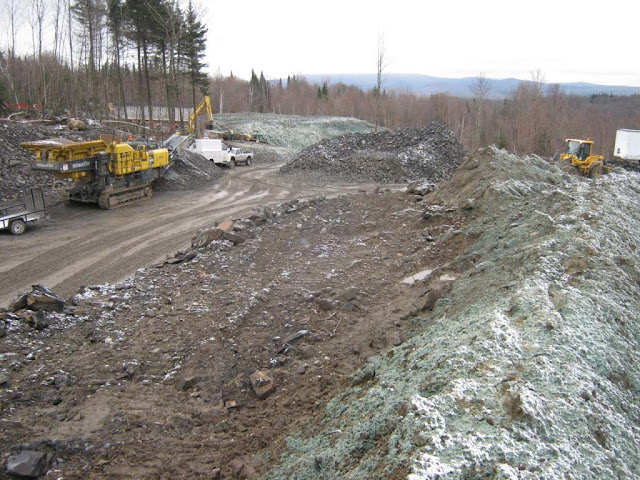 Similar construction and operation stormwater permits have been issued by Vermont’s ANR to GMP for dealing with water running off of 27 acres of impervious surfaces that would be the permanent road network on top of the Lowell Mountains serving a ridgeline wind project.   As with the Sheffield stormwater permits, the turbidity levels are proposed to be permitted above levels protective of trout waters.  The Lowell Mountain streams proposed to be impacted by GMP’s wind project are classified as A(1), which require the highest level of protection.

If you are interested in commenting on the draft stormwater permits being issued to Green Mountain Power, et. al., in Lowell,

A public hearing will be held on Wednesday, March, 2, 2011 at 6:00 PM at the Lowell Graded School, located at 52 Gelo Park Road in the Town of Lowell, Vermont. The public hearing is an opportunity for the public to provide comments in person on the draft permit. Written comments will still be accepted through the close of the public notice period as specified below.

Written public comments on the proposed permit are invited and must be received on or before 4:30 pm, Thursday, March 3, 2011 by the:

Comments may also be faxed to (802) 241-3287 or e-mailed to stormwater@state.vt.us. All comments received by the above date will be considered in the formulation of the final determination.