Vt. Senate Committee Looks At Allegations That CSWD Dumped Glass Instead Of Recycling It

Posted on May 2, 2019 by vermontersforacleanenvironment 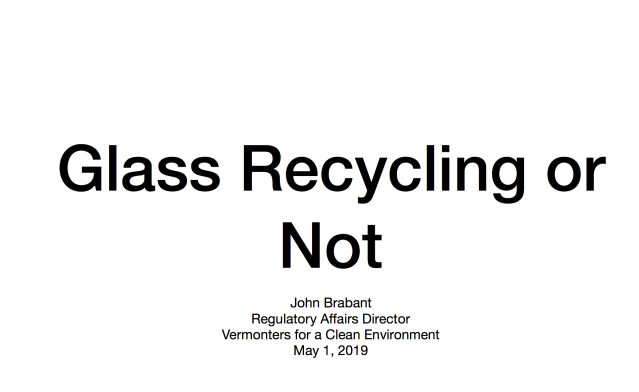 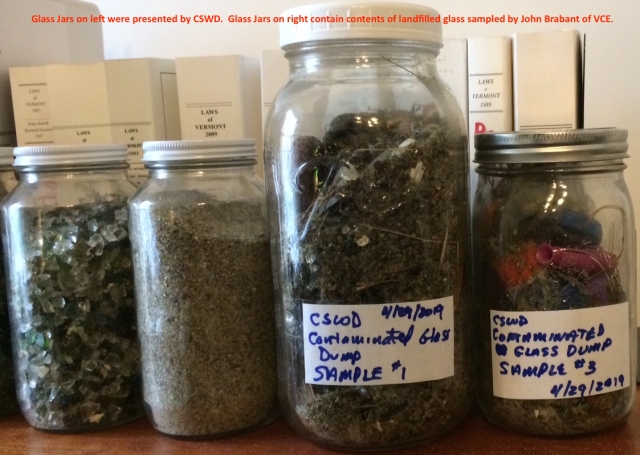 Vt. Senate Committee Looks At Allegations That CSWD Dumped Glass Instead Of Recycling It

The state is investigating the Chittenden Solid Waste District for allegedly dumping glass it collects from northern Vermont instead of recycling the material as required.

The state put the district on notice last year that it had allegedly violated environmental laws. The allegations resurfaced Wednesday in a Senate committee; Chittenden Solid Waste District officials say they have not done anything wrong.

John Brabant was a state regulator on waste issues for 25 years and now works for Vermonters for a Clean Environment, an activist group.

Earlier this week, Brabant tapped into his expertise and explored a closed landfill in Williston. He said he found an unlicensed dump, piled with thousands of tons of crushed glass that was supposedly recycled.

The former regulator brought back photos and videos of the site, plus a little show-and-tell for the Senate Natural Resources Committee: large Mason jars full of crushed glass and chunks of plastic.

The Chittenden Solid Waste District owns the site. Brabant said the district apparently dumped truckloads of the material over a steep bank.

“It’s an amazingly large dump,” Brabant said. “This stuff, because it does not meet the exemption provided under the PGA – the processed glass aggregate exemption policy – it is then regulated as a solid waste. It must therefore go to a solid waste management facility that is certified. This is not one that’s certified.”

Here’s the thing about glass: It’s an inert waste, meaning it doesn’t break down into anything nasty or poisonous. It’s heavy, so it’s expensive to truck and store. Finally, there’s not much of a market these days for that empty wine bottle you toss into your recycling bin.

Most glass that gets recycled doesn’t get made into new glass containers. It’s often crushed and used as sand in construction projects.

Essex-Orleans Sen. John Rodgers said the state policy around glass disposal doesn’t make sense. He argued the glass should be landfilled until recycling markets improve. Instead, he said, haulers in the Northeast Kingdom are required to truck it to Chittenden County and pay the district to dispose of it.

“So not only are we driving huge amounts of miles and burning fuel that we shouldn’t be burning, but we’re also having to pay the tipping fee, and then Chittenden County Solid Waste was illegally dumping it,” Rodgers said.

Solid waste district officials disagree with the allegations of wrongdoing. When pressed by Rodgers, Jennifer Holliday — the district’s director of public policy — told the committee that she could not comment on the notice of alleged violation, known as an NOAV, that the state issued last April.

“So why was the stuff dumped?” Rodgers asked. “Was there just no market for it at that time?”

“I don’t want to comment on that current NOAV right now,” Holliday told him. “We disagree with the NOAV. It would take a lot of in-depth conversation, and I don’t want to get into that.”

“I don’t want to comment on that current NOAV [notice of alleged violation] right now. We disagree with the NOAV.” — Jennifer Holliday, Chittenden Solid Waste District

Chittenden Solid Waste District executive director Sarah Reeves said her staff is working with the state to resolve the issue. In an email, she said, “it’s not accurate to describe the discussions we’re having with them as an investigation.”

The notice of alleged violation says the district has dumped thousands of cubic yards of crushed glass at two locations on the district’s property. The document says the district did not have approval to put it there, and that quarterly reports filed with the state incorrectly stated that the material has been used for “local projects.”

The district was also ordered to either remove the glass or obtain the proper approval from the state to put it there.

The issue is not resolved. An Agency of Natural Resources official told senators that the case has been referred to the Attorney General’s Office.