Posted on December 6, 2016 by vermontersforacleanenvironment 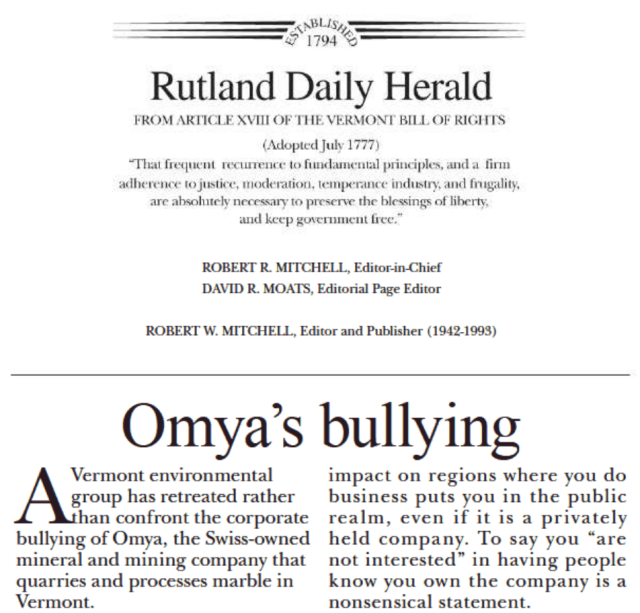 A Vermont environmental group has retreated rather than confront the corporate bullying of Omya, the Swiss-owned mineral and mining company that quarries and processes marble in Vermont.

Rather than engage in a costly legal battle to defend her right to name the owners, Smith decided to remove them from her website.

The two owners she had mentioned are Max Andre and Eric Schachenmann.

Omya said that because the company is privately owned it is under no obligation to make public the names of its owners. And yet its insistence that Smith has no right to name the owners betrays willful ignorance of the meaning of the First Amendment to the U.S. Constitution. Omya’s action foreshadows the kind of corporate/government oppression that could be in store under the administration of Donald Trump.

By itself, the issue of VCE’s website is a small matter. Yet the arrogance of a corporation in arrogating to itself the power to quash information in the American media echoes the kind of arrogance voiced by Trump. Corporations that wish to silence critics, or silence those with the temerity to name corporate officials, may well find a friend in Trump.

There are laws in the United States protecting people from violations of their privacy, but the expectation of privacy protected by law is personal and narrow. People are not permitted to take pictures through the window of your house and then publish an embarrassing photo for no reason. If you are on the street, the law does not protect you from being photographed because on the street you have little expectation of privacy.

To be the owner of a major corporation with an important impact on regions where you do business puts you in the public realm, even if it is a privately held company. To say you “are not interested” in having people know you own the company is a nonsensical statement.

Corporations have a great deal of power, and when they wield it irresponsibly, they can do significant harm. In the case of Annette Smith, Omya’s threat has caused her to self-censor herself, which is a harmful outcome also faced by the media when powerful economic interests make threats.

When Trump or his followers threaten the media, which they have done, they create an atmosphere that encourages self-censorship, which is damaging to the free flow of ideas essential in a democracy. It appears, however, that the president-elect is less interested in the free flow of ideas than in the manipulation of information and the propagation of lies, all to help him accumulate power. Like the threatening message from Omya, it is a subversion of democracy.

The peculiar thing is that Omya has no need to behave in a threatening fashion. It is an important business in Florence, Middlebury and elsewhere, producing a useful industrial product and employing people in well-paid jobs in its quarries and at its Florence processing plant. It is a major customer of Vermont Railway.

Smith and her organization have sometimes been a thorn in the side of the company, addressing issues of pollution and transport related to its calcium carbonate operations. But welcome to America, Mr. Andre and Mr. Schachenmann. Grass-roots groups across the country play an important role in monitoring compliance with environmental laws, in order to protect ordinary Americans from the pollution and other damaging effects of industrial operations. All we have to do is take a look at North Bennington, where industry left behind poisoned wells. Neighbors are not supposed to poison their neighbors’ wells. And keeping track of the companies with the potential of doing so is what groups like Smith’s are all about.

That goes for Omya and its owners — Max Andre and Eric Schachenmann.

VCE's mission is to raise the voices of Vermonters and hold corporations accountable for their impacts on our people, our land, our air and our water. We are united in the belief that Vermont's future lies in conserving its clean, rural, small-town environment. We have joined together to pursue the common goals of encouraging economic development with minimal environmental impacts and preserving Vermont's natural beauty. VCE is committed to providing facts and information so that people can make informed decisions. We encourage your participation.
View all posts by vermontersforacleanenvironment →
This entry was posted in Omya and tagged free speech, Omya. Bookmark the permalink.