Ron Shems and the Natural Resources Board, again

Posted on May 4, 2011 by vermontersforacleanenvironment

For those of you following our inquiry into Governor Shumlin’s appointment of Ron Shems to serve as Chair of the Natural Resources Board, here is a recent response from the Governor’s Counsel, Beth Robinson, to Sen. Ginny Lyons who chairs the Senate Natural Resources and Energy Committee.  Those of us who care about the environment will find a disturbing similarity to the Douglas administration’s focus on environment protection in the goals set out for Ron Shems “to find better ways to streamline our permitting process.”  No, no mention of doing a better job protecting the environment.   But wait, there’s more.  Read the letter, then we will move on to the current members of the Natural Resources Board and their status.

Of the 14 Board/Panel members, the Chair is an unconfirmed Shumlin appointee, 7 are apparently unconfirmed Douglas appointees (including the Vice Chair), and there are 2 vacancies.  Only 4 of 14 are confirmed.  Governor Douglas made several appointments to the NRB just before leaving office.  The Senate Natural Resources Committee is the committee of jurisdiction charged with confirming NRB appointees.  Not only have several Douglas appointees been serving for a year without being confirmed, but the most recent appointees are also unconfirmed.  And the legislature is about to go home.

Mention confirmation of Environmental Board appointees and many Vermonters will remember the 1994 confirmation process that threw three of Vermont’s best environmentalists, Elizabeth Courtney, Terry Ehrich, and Nundy Bongartz, off the Environmental Board.  Then-Governor Howard Dean did not defend his appointees.  Now we have a new Democrat governor who has been treated to a parting gift by Governor Douglas.  These are four year terms, so the NRB as it currently exists means that the policy of the Douglas administration — to do nothing — is likely to continue unless action is taken, and soon.  Does Governor Shumlin care about the environment, or those charged with protecting it?  Will the Senate take up the confirmation of the Douglas appointees before departing Montpelier until January?

*Update — On Wednesday, an email sent by Governor Shumlin’s office 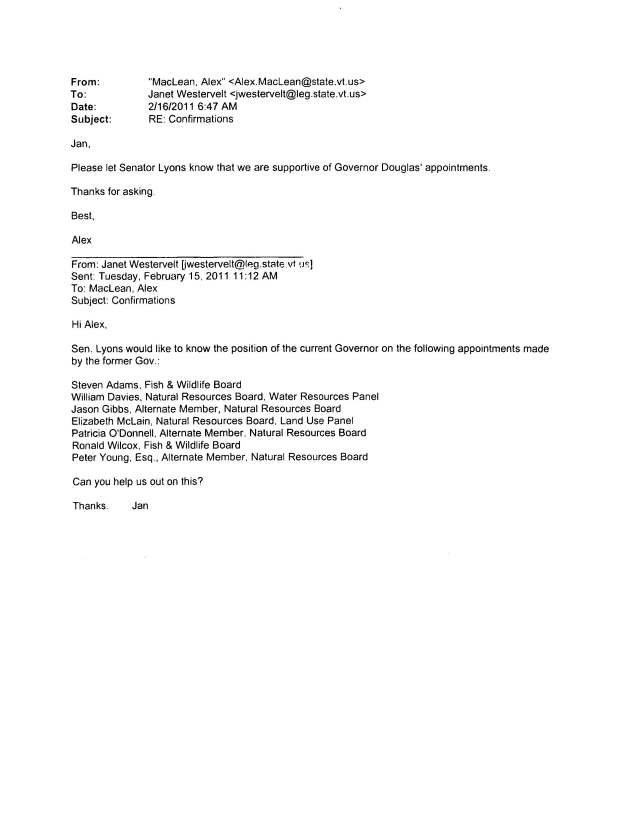 Below are the current appointees, the date of their appointment and when they expire, and the statutory language that governs the NRB.

(a) A natural resources board is created with a land use panel and a water resources panel. The board shall consist of nine members appointed by the governor, with the advice and consent of the senate, so that one appointment on each panel expires in each odd numbered year. In making appointments, the governor and the senate shall give consideration to experience, expertise, or skills relating to the environment or land use. The governor shall appoint a chair of the board, a position that shall be a full-time position. The other eight members shall be appointed by the governor, four to the water resources panel of the board and four others to the land use panel of the board. The chair shall serve as chair on each panel of the board. Following initial appointments, the members, except for the chair, shall be appointed for terms of four years. The governor shall appoint up to five persons, with preference given to former environmental board, water resources board, natural resources board or district commission members, with the advice and consent of the senate, to serve as alternates for board members. Alternates shall be appointed for terms of four years, with initial appointments being staggered. The board chair may assign alternates to sit on specific matters before the panels of the board, in situations where fewer than five panel members are available to serve. No person who receives or, during the previous two years, has received a significant portion of the person’s income directly or indirectly from permit holders or applicants for one or more permits under chapter 47 of this title may be a member of the water resources panel.

(b) Any vacancy occurring in the membership of the board shall be filled by the governor for the unexpired portion of the term.

(c) Notwithstanding the provisions of 3 V.S.A. § 2004, members shall be removable for cause only, except the chair, who shall serve at the pleasure of the governor.