Posted on April 7, 2011 by vermontersforacleanenvironment

The mail piled up while I was on the road for two weeks moving my mother from a retirement center too far from family to one where family is nearby.  [A lesson learned for those of you in similar positions:  don’t wait until something bad happens, there is a reason elderly parents need to live near their children because once hospitals are involved there becomes an immediate need to be nearby].  Among the many white envelopes on my desk was a letter with an incomplete address and no return address. The postmark was Burlington.

Inside was one piece of paper with a photocopy of a page from a Vermont Statute book. Sections of the text were highlighted.  The subject matter was State Land Use Law, specifically the statute governing administration of the Natural Resources Board. 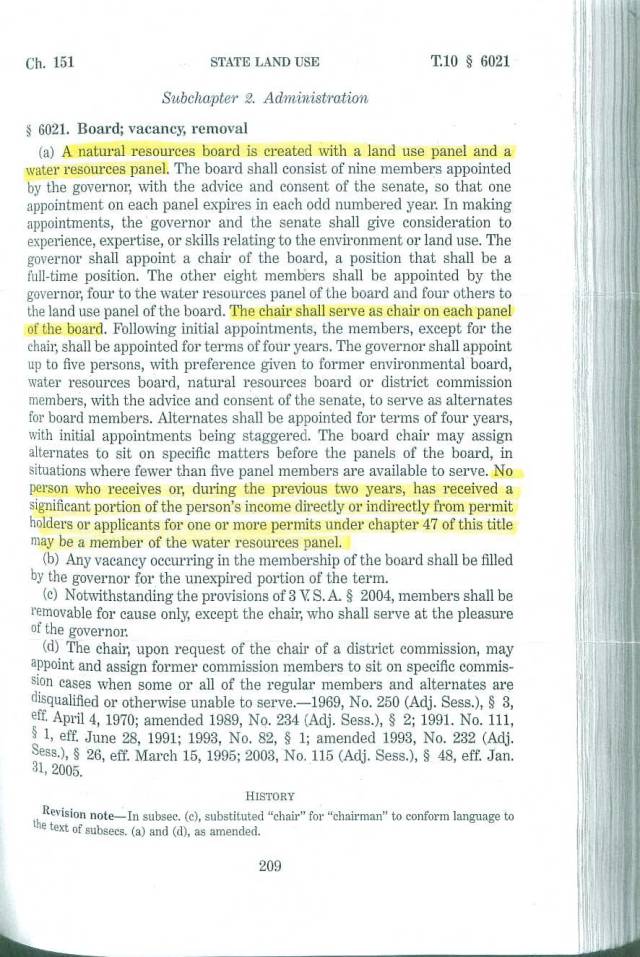 Regular readers will remember that we wrote about Governor Shumlin’s appointment of Ron Shems to chair the Natural Resources Board and pointed out that his work litigating on behalf of wind developer First Wind over its stormwater construction permit represented a conflict of interest.

Our anonymous source highlighted the following:

No person who receives or, during the previous two years, has received a significant portion of the person’s income directly or indirectly from permit holders or applicants for one or more permits under chapter 47 of this title may be a member of the water resources panel.

We sought a legal opinion which was that the statute was clear and unambiguous, and we were reading it correctly.  So we contacted Governor Shumlin’s office and pointed out that it appears by law Ron Shems cannot serve as chair of the Natural Resources Board.  (Note that we did not go to the press with this, but as is our practice, we engage directly with people whenever possible, including business people and wind developers and state government.)

Thanks for passing that along.  We are aware of the statute.  Before accepting the position, Mr. Shems made full disclosure of his potential conflicts.  Although it was not clear that the amount of income he had derived from representing permit holders or applicants rose to the level of “significant” for the purposes of this statute, Mr. Shems made the decision, with the Governor’s support, to recuse himself from participation on the water panel to avoid any  question regarding his compliance with section 6021.  I appreciate your reaching out to us.

But the statute does not seem to allow for recusal.   And if Ron Shems is not chairing the water resources panel, who is running it?  Why hire someone who can only do half the job?