Posted on March 19, 2011 by vermontersforacleanenvironment

On Friday, March 18, 2011, VCE filed our comments on the Deerfield Wind Supplemental Draft Environmental Impact Statement (SDEIS) for Iberdrola’s proposed utility scale wind project on two ridgelines in Readsboro and Searsburg.  Our comments, and those of many other people on both sides of this divisive issue, were submitted to Green Mountain National Forest (GMNF) Supervisor Collen Madrid, who will make her decision on Iberdrola’s application for a Special Use permit to construct wind turbines on US Forest Service (USFS) Land sometime in the next few months.  Her decision is appealable to the regional forest supervisor in Milwaukee, Wisconsin.

This is the first utility scale wind turbine application for USFS land, therefore it is precedent-setting.  VCE staff and our members dedicated many hours to understanding the issues and becoming informed about the relevant standards and guidelines required for compliance with USFS laws and regulations.

To summarize our comments, we have concluded that the information on which the Forest Service has based its proposed determination, including the information it has received from third-party independent contractors, is insufficient to enable you to make a decision on the application at this time. The decision to approve or deny the first utility scale wind turbine project in Vermont on USFS land should be based on information that is objective and complete.  The SDEIS does not meet that standard.

We looked at the process that the USFS used to create the SDEIS and found the preparer was not independent as required by regulation 36 CFR 251.54(g)(2)(i) and had a conflict of interest as defined by Forest Service Manual (FSM) Chapter 1580.42a.

We looked at the SDEIS discussion about the need for the project and found that requirements of regulation FSH 2709.11, Chapter 10, Section 12.32a had not been met.

We looked at the Goals of the GMNF 2006 Land and Resource Management Plan and found that Goal 11 has been met while Goals 11 and 17 would not be met if the project is approved.

We worked with a certified professional engineer to evaluate the SDEIS for compliance with Federal, State and USFS requirements.  He found that “State and Federal (including the Forest Plan) water quality, treatment, and resource protection standards may not be attainable for all of the build scenarios,” and noted possible lack of compliance with the Federal Clean Water Act,  Executive Order 11990, Vermont Dam Safety Standards, the Vermont Water Quality Standards (VT. Code R. 12 004 052), and the GMNF Land and Resource Management Plan.  In addition, VCE identified a lack of compliance with the requirement to perform the public trust analysis for groundwater.

We evaluated the information on wind turbine noise provided to the USFS through the SDEIS and found it to be out of date, not independent, and inadequate to fully characterize the noise issues as they impact public and wildlife health, and noise impacts to the George D. Aiken Wilderness less than 2 miles to the east.

We learned about Wilderness, what its purpose is, how it is managed and who manages it.  Through laws and regulations, forest managers have clear guidance to follow to manage Wilderness, including directives about surrounding lands and priorities when there appear to be conflicting uses between different management areas within the USFS.  We learned that even without this wind turbine proposal, the GMNF managers have not been good advocates for the Aiken Wilderness, and have not complied with specific directives of the George D. Aiken Wilderness Management Plan.

We learned that the Aiken Wilderness is a very special place, the first Wilderness created in Vermont, consisting primarily of many wetlands, open areas, with numerous ponds and many distant views of the USFS lands containing the ridgelines at issue in this project.  It, and surrounding USFS land, are supposed to be managed for solitude and to the highest visual standard.  Wilderness management standards takes priority over all surrounding USFS land use, with a goal towards Primitive for Recreational Opportunities and trending towards Old Growth forest where distant vistas will become more open over time.

We evaluated the SDEIS information on birds, bats and other wildlife and found a lack of credible consultants, no mention of EO 13186, out of date information, and failure to comply with the “Viability Standard” of the 1982 Planning Rule.

We listened to conversations at the two USFS Open Houses to understand how public use of USFS land will be balanced with public safety requirements and found that they are incompatible uses that create an irreconcilable conflict.

The process we went through to understand the issues was frustrated by, if not outright obstruction, a lack of cooperation from USFS GMNF staff in response to requests for information, particularly about the George D. Aiken Wilderness.

Weeks before the second deadline for public comment (there were three announced deadlines, two extensions), a member of VCE went in person to both the Rutland and Manchester USFS offices requesting a copy of the Aiken Wilderness Plan, and came away empty-handed.

On March 4, the second announced deadline for comments, after the announcement that the deadline would be extended for two more weeks until March 18, VCE’s staff called  the USFS in Rutland and asked for the Aiken Wilderness plan, and was told it was over 100 pages and would be waiting at the front desk.

VCE’s member went to the USFS office in Rutland to pick up the Aiken Wilderness plan, only to be told there was nothing waiting at the front desk, the USFS staff had no idea what he was looking for.  But he persisted, and eventually was invited to look through the filing cabinets where two copies of the Aiken Wilderness Plan were found.  Other documents that he requested were mailed to him, arriving the morning of March 18.  And he was told there was something checked out of Manchester that he would have to go to Middlebury to see. Whatever that is, it was not found before the March 18 deadline.

As with all the difficult issues VCE takes on, we have learned a lot about new subjects. We are continuing our education about stormwater, erosion control, headwaters, and wetlands, areas previously covered by our colleagues in the environmental community, but now abandoned where ridgeline wind projects are concerned.  Our special joy in this project was to learn about Wilderness, especially the George D. Aiken Wilderness.  We still have not found the historical documents that describe the attributes that led visionary Vermonters to set it aside as a Wilderness, but such a large high elevation plateau area full of ponds, wetlands and streams is an environment where life flourishes, “with the imprint of man substantially unnoticeable.” 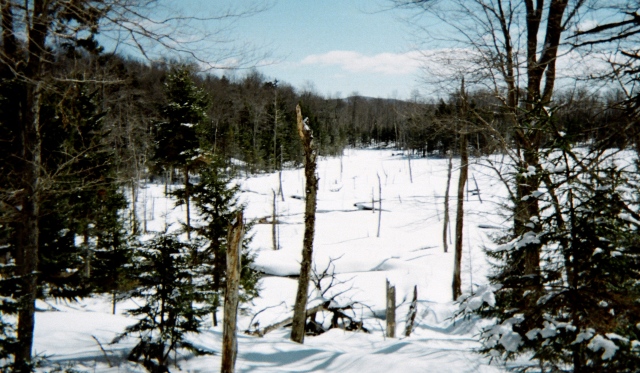 Footnotes to our comments, with clickable links:

[2] From link above, Prefiled Testimonies and Exhibits Supporting Application March 26, 2010

[27] In another wind turbine case in Vermont. Stantec’s bird and bat “expert” failed to perform a Fall migratory bird study even though he acknowledged: (1) that the Hawk Migration Association recommended that at least three years’ worth of studies be performed; (2) that you see a significant number of migrants in the fall over internal ridgelines in the northeast, and (3) that peak periods of migration are important to note when conducting methodologies impacting studies.